Arthur Wellesley, the first Duke of Wellington, was born in Dublin in 1769. He served in Europe and in 1797 his regiment was sent to India where his brother became Governor General later that year. In India, Wellington saw active service until he returned home in 1805. He sat as an MP for Rye between 1806 and 1809, becoming Irish Secretary in 1807.

In 1809 he was sent to assume command in Portugal. Wellington gained military distinction in the Peninsular Campaigns during the French Wars, culminating in the victory at Waterloo. He was raised to the peerage as the Duke of Wellington in recognition of his achievements and he sat in the House of Lords for the rest of his life. 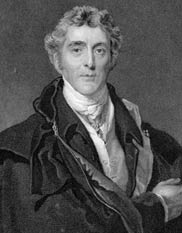 In 1827 he became Commander-in-Chief of the British Army, an office in which he was confirmed for life in 1842. Wellington led the Tories in the Lords and threw his weight behind most of the administrations between 1818 and his death in 1852.

He was a frequent visitor to the Great Exhibition of 1851, and Cobden noted with vexation that when he entered ‘all other objects of interest sank to insignificance.’ He was in his usual health until September 1852, and on the 13th he drove over to Dover from Walmer. He returned to dinner two hours later than usual, was very hungry, and ate hastily and heartily. He had a fit in the night, and during the course of the 14th his health gradually deteriorated, and he died in the afternoon.

At the date of the census (30th March), Wellington was living at Apsley House, in the Mayfair area of St George Hanover Square in the City of Westminster.

Armed with my copy of British Data Archive's London 1851 Census on CD, I clicked on St George Hanover Square in the Master Street Index and then searched for Apsley House.

It showed that it was on piece 1476 folios 186 to 193. The census set booklet shows that this piece is on CD3. I quickly browsed through the pages starting at the book marked folio 190 and within 5 pages came across the entry for Apsley House.

The Duke of Wellington was registered there as: "Arthur Duke of W." His age (81) and rank or profession (F- Marshall) entries confirmed that I had found the right person. 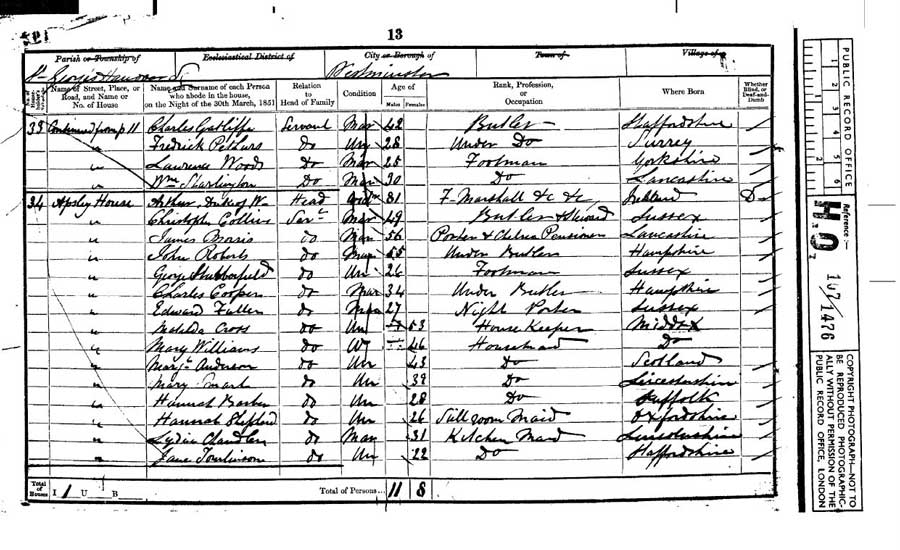